On 1st February, I took a plane from London to Helsinki to take part in the opening week events of Festival of Political Photography 2017: Post-Food. The project Spiritual Flavours, which is part of my practice-led PhD, had been selected to be exhibited at STOA cultural centre, alongside Asunción Molinos Gordo’s Project, The Non-Egyptian’s Restaurant, from 4th February to 30th March. 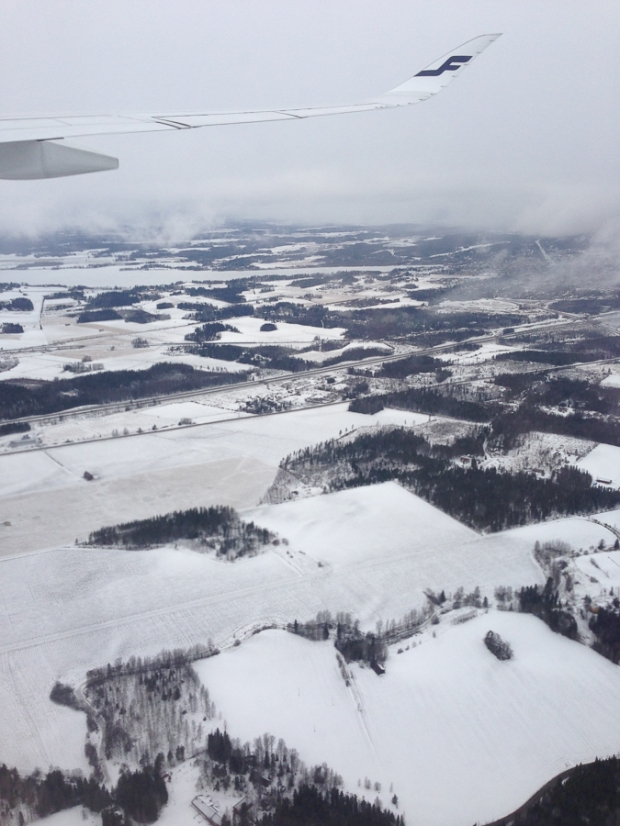 Seconds before landing in Helsinki

Now, a week away from the end of the exhibition, I would like to reflect on how productive for my research and how much fun it has been to take part in this festival and to attend the inaugural week, where I met both the other photographers/artists and the organisers.
The timing for this exhibition could have not been better. Just over two years into my PhD, this opportunity has allowed me to explore different ways to present and make sense of the various “ingredients” of the Spiritual Flavours project. To start with, when I was invited to take part in the festival, I had edited a five-minute introduction of the film. The directors of the festival were particularly interested in the film, so the exhibition became a great motivation to edit the complete longer version, (which is now twenty-eight minutes) for an international audience.

It was also very good timing because I have received a UCL Cross-Disciplinary Training Scholarship for the academic course 2016/17 to attend the core course of the MA in Documentary and Ethnographic Film in the anthropology department (as well as some other courses related to Material Cultures and Visual Anthropology). So, this year I have been able to further develop my knowledge and skills in documentary and filmmaking and have received the support of staff and students in the making of this longer version – this scholarship effectively extends my PhD timeframe and funding for one year, which is a great opportunity to develop the practice elements further, such as the forthcoming recipe book. 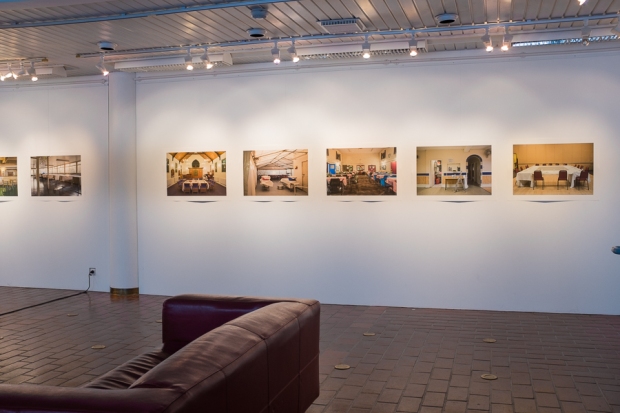 For the exhibition at STOA, I developed various potential layouts for the images, drawing on the various elements of the project. This editing process has helped me recognise that, additionally to the film and the recipe photo book, there is another strand of images that explore the spatial arrangements of food events at the various worship spaces. This other series, together with the portraits of the people who had contributed recipes for the film and the book, were exhibited as the backdrop to the film. These prints, alongside their captions, provided further understanding of the various elements that my PhD project brings into dialogue: affective dimensions of home-cooking; biographical and spiritual narratives; food as an element that connects people from different cultures and faith communities and; food as an element that connects the public and the private. 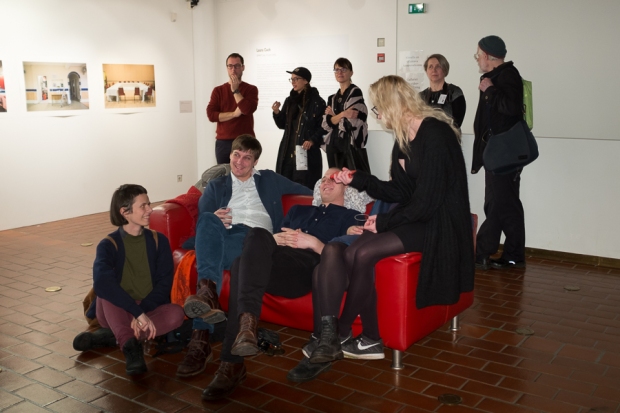 It was wonderful to be able to share the experience of this exhibition with Claire Dwyer, my PhD first supervisor who, not only had closely followed the development of my project and of the various layout proposals for the show, but decided to come for a long weekend to Helsinki. Her stay coincided with the opening of the show at STOA (Friday eve); the one-day seminar ‘Post-Food’ at the Finnish Museum of Photography (all day Saturday) followed by a dinner/sauna/party at the newly built sauna space at top of the museum (the building of a previous Nokia cables factory) and; the artists talk that Asunción Molinos Gordo and myself gave at STOA (Sunday morning). We even managed to squeeze a very informal “tutorial” over a lovely vegetarian buffet lunch at café STOA (which has entered the vault of my fondest memories), before she headed to the airport to go back to London. 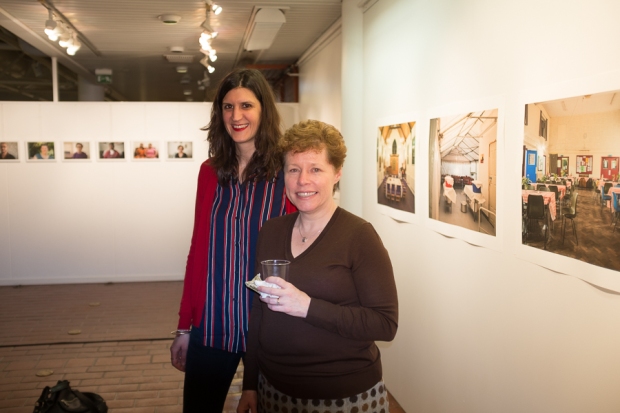 Both Claire and I agreed that the location for the show could have not been better either. Whilst the majority of the exhibitions in the festival took place in the Finnish Museum of Photography, which is very central (please keep an eye on this blog, as I will be posting about the various works in the show soon), the location of STOA cultural centre, where Spiritual Flavours and the Non-Egyptian Restaurant were exhibited, was in a more suburban Eastern neighbourhood of Helsinki, which is one of the most multi-cultural areas of the city. STOA has a diverse programme of events produced by the City of Helsinki Cultural Office, which include a wide variety of theatre and dance performances. In addition, STOA has a library and offers courses organised by the Finnish and Swedish Adult Education Centres, and the Youth Activity House Kipinä. As such, the centre attracts a wide variety of local people from diverse cultural backgrounds, who would not necessarily attend the exhibitions at the Museum in central Helsinki, but who might stumble across the exhibitions at STOA on their way in and out from the library, the café/restaurant or any of the courses. 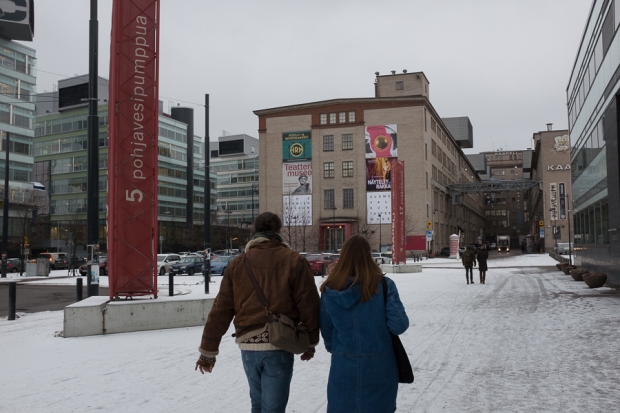 Walking towards The Finnish Museum of Photography in Helsinki 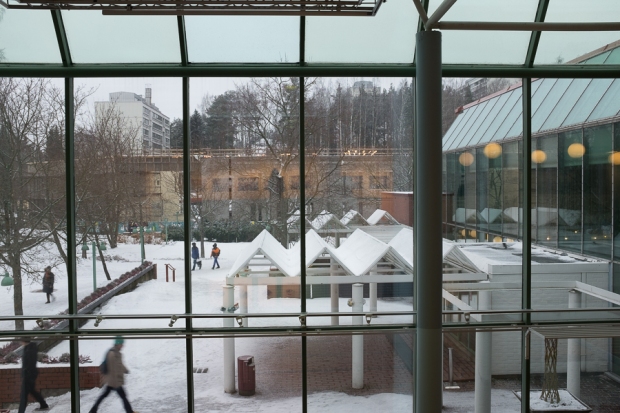 View from the inside of STOA

Whilst the majority of the people who attended the opening of the exhibition on Friday 3rd were people that were following the festival’s activities, the people who attended the artists’ talk, which Asunción Molinos Gordo and myself gave at the exhibition space on Sunday 5th, were mainly local people of a wide range of ages and from various cultural backgrounds. Before Asunción and I arrived at STOA for the talk, Claire and the festival creative directors, Anna-Kaisa Rastenberger and Sanni Seppo, witnessed an interesting interaction: various kids of different ages, who were attending a Quran class, heard the reciting of the Quran in the film and rushed into the exhibition space to watch it. They were also intrigued by the pictures on the wall and started asking questions about the different worship spaces. During the talk, a young woman from Somalia asked many questions about the film and spoke about some of her family food traditions and how she was going to bring some of her friends to see the show. Later on, after our delicious lunch with Claire, I was near one of the STOA exits, when two girls heard the call for prayer that Aziz recites in the film and they started running towards the exhibition space to find out what it was. I followed them and they told me they thought it was prayer time. Then, two other men in their twenties told me they were Muslim and asked me questions about the content of the exhibition. I was very pleased to see how the work was engaging some of the people visiting the centre who responded strongly by asking questions and talking about their own identities.

It was also a real privilege to exhibit alongside Asunción Molinos Gordo, with whom I connected in many different levels, beyond the coincidence that we are both Spanish female artists, born the same year and who live abroad. Her project, The Non-Egyptian Restaurant, involved converting a gallery space in Cairo into a restaurant where each week a different dish would be cooked and served in collaboration with local people, each recipe questioning Egypt’s food trading, consumption and people’s relationship with the urban soil and its agricultural history. Having the two projects in the same exhibition, I think generated an interesting conversation around the possibilities of arts projects that engage local people in activities involving food preparation and consumption. In both projects, culinary practices serve as a vehicle to reflect on personal and collective traditions and histories, as well as on certain political dimensions of food. Whilst The Non-Egyptian Restaurant encourages people to think about food production, international trade and agricultural histories, Spiritual Flavours deals with issues around migration, religious diversity and conviviality. 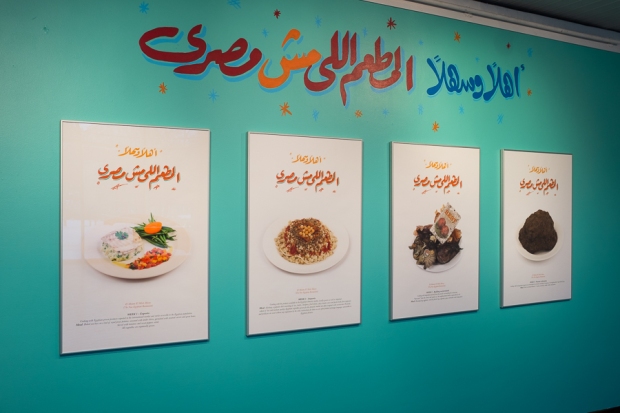 Taking part in the Festival’s opening week also provided an array of experiences where food (and also drinks) intersected with the personal, the cultural and the political. The artistic directors of the festival, Anna-Kaisa Rastenberger and Sanni Seppo, as well as the rest of the production team, Tiina Rauhala, Ulla Kallakivi and Laura Porola, took good care of us throughout the entire visit. They organised the majority of the meals, which provided a fantastic tasting of Finnish vegan food and numerous opportunities to chat with the other artists and people involved. Those, like me, who came from abroad, had the bonus of staying at a neo-Renaissance wooden villa, Villa Eläintarha, which was built in 1889 as a home for Frans Oskar Blom, who worked for the Finnish state railway company, and his family. This villa is part of what little remains of a larger villa community in the outskirts of the city and was bought by the City of Helsinki and restored to become a museum and artists’ residence since 2000, offering its visitors a unique experience of a 19th century bourgeois home. In peaceful surroundings by the sea, what was once the outskirts of the city is now very central. 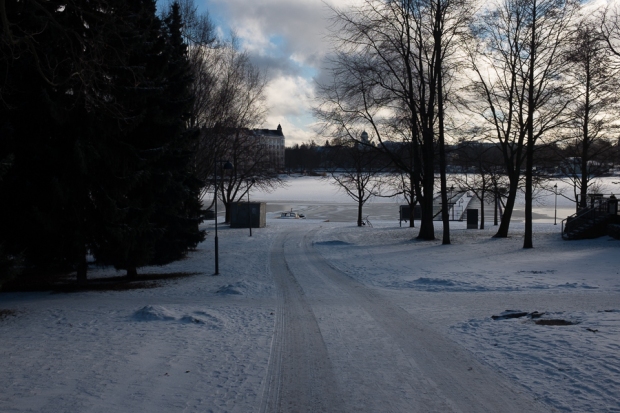 We had the entire residence at the top floor to ourselves, with beautiful bedrooms, each with period old chimneys, wall papers and furniture. The majestic living room and, most importantly, the kitchen became our gathering spaces in some evenings and at breakfast time, when we eagerly volunteered to hold Asunción’s three-year-old little girl, Olivia, who is the friendliest and most charming child I have ever met and who, we unanimously agreed, became the star of the festival. 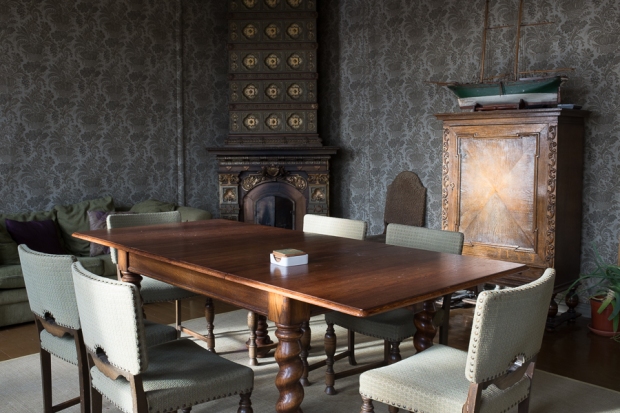 Some of the other highlights of the opening week were the opening night at The Finnish Museum of Photography, which later (thanks to Sanni Seppo’s connections) led to the entire group crashing the party that was celebrating the just released latest film, ‘The Other Side Of Hope’, by Aki Kaurismäki’s (one of the most well-known Finnish film directors) at the Dubrovnik downstairs bar. Anna-Kaisa Rastenberger had warned us earlier that day, after we had the press conference, about Finnish people’s passion for drinking. She could have not warned us enough as the following day, all the villa residents including myself chose to chill inside the villa in recovery mode, instead of exploring the city.

Live music at the Dubrovnik Bar

The other fun peak of the week was the sauna experience at the top of the museum building. The experienced Helsinki residents proceeded to educate the non-experienced part of the group into the rituals of sauna and a hot tub bath, which in friendly contexts like the one we had, also involved sharing food, beer and the a new PVF Festival tradition of passing around a bottle of vodka to drink a capful. Tim Franco captured in my opinion the most iconic picture of the evening, when Anna-Kaisa and Sanni went out into the roof terrace to jump and embrace the snow. With their enthusiasm, positive energy and hard work, they left a foot print, not only on the snow, but also in the imagination of the people who have taken part in the Festival and of those who are visiting the exhibitions.

On Monday 6th February, the last day I was in Helsinki, I finally had some time to wander around the city after everyone else had left the villa for the airport. I had never been to any Scandinavian country before. The sun came out, for the first time since I arrived, and the temperature went down to -13 ºC. With my coat hood wrapped tight around my head and with not very appropriate shoes, I embarked in a three-hour long walk on the snow following the sea front, before I visited Sanni Seppo at her home who kindly took me to the airport, after having a warm cup of tea and some pastries that are traditional of her Finnish home town.