The second workshop for the Brentside pupils on the Faith in Suburbia Architecture Project involved a fieldtrip visit to some of the project case study places of worship. Armed with sketch books and cameras the whole group left Brentside on the E3 bus and then divided into two groups, with the first group starting with a visit to Our Lady and St Joseph’s Catholic Church. 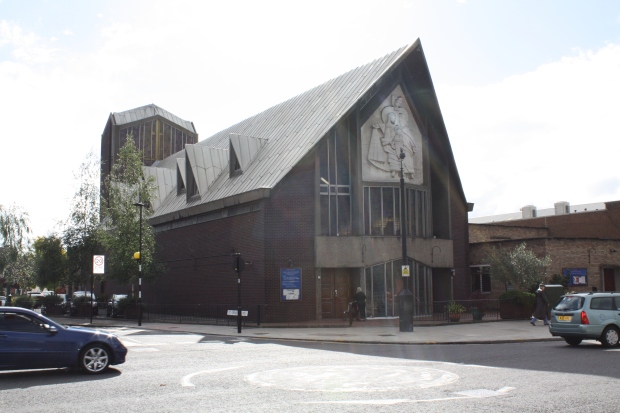 Viewing Our Lady & St. Joseph’s from across the road

None of the pupils in the group had been to the church before, although some had previously been to a Catholic church abroad, for example with a grandparent in Spain. We began outside the church looking at the striking height of the building and discussing the modern sculpture of the holy family (by Polish artist A. K. Bobrowski) on the exterior. The group agreed that the building could be clearly identified as a church and debated the age of the church, which was built in 1967, from its architectural style. 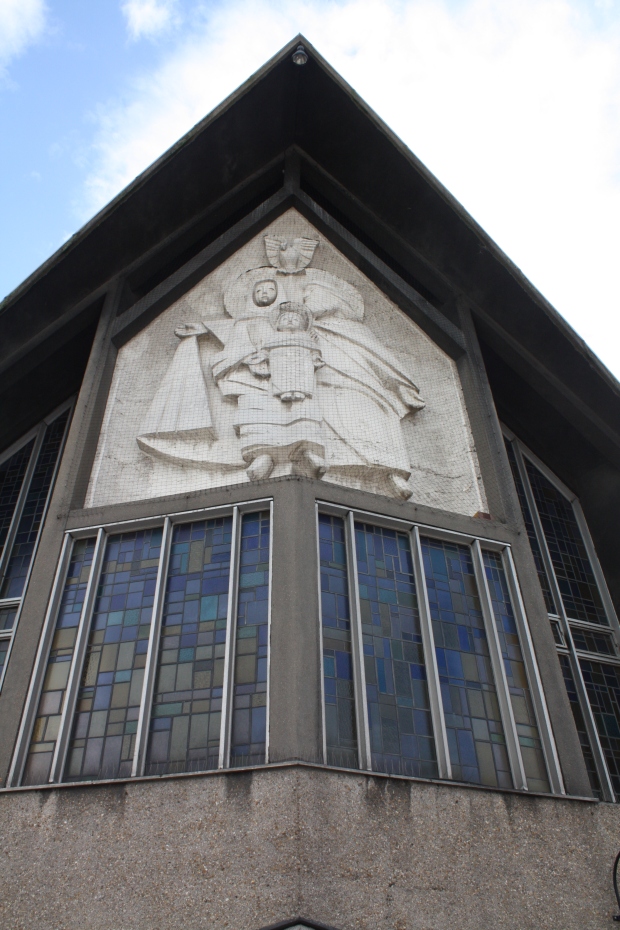 A. K. Bobrowski’s sculpture on the exterior of Our Lady & St. Joseph’s

Once inside the group were greeted by parish priests, Father Charles Cahill and Father Jeffrey Downie, who were happy to answer questions about the church or catholic religious practice. The pupils concentrated particularly on the shape and style of the building, producing some nice sketches of the building,  and also took photographs of the stained glass windows. 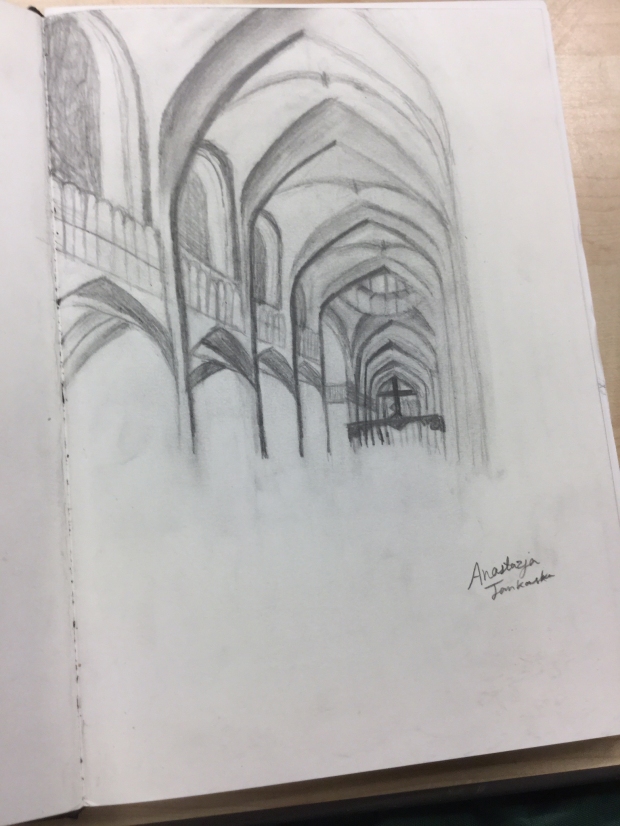 The pupils had been prompted by the architects to think about key elements of the religious building and both the stained glass and the arches were picked out by the pupils and later incorporated into the concept models. We showed the students a picture of the original church, built in Edward Pugin in 1860 and some of them drew interesting parallels with the architectural style, particularly the arched roof, of the old and current church. We also debated the ways in which the space of the church defined religious practice – rows of pews facing forward towards a raised altar. Father Charles explained the importance of the tabernacle and altar, and how this was a focal point for believers. The other focal point in the church is a very large wooden crucifix which hangs over the altar in front of a new ‘fake’ stained glass window – the ‘resurrection window’ which is illuminated by a light box.

Reflecting on the church, as a building, the students described its size, accommodating a large community, and the calming effect of plain white walls. Although the church was empty, on this week day afternoon, the pupils were able to reflect on the role of community in the construction of the building – such as the sponsorship of the pieces of glass in the resurrection window by the congregation.

From our Lady and St Joseph’s we walked, via some sandwich shops for lunch on the go, back up Greenford Avenue and along Drayton Bridge Road until the railway bridge where we paused to look at our next site visit, the London Sikh Centre. Looking at the low, industrial style building with a large surrounding car park the group tried to guess what the building was before it became a gurdwara – ‘a warehouse perhaps?’. In fact this is a purpose built religious building, built for a Christian Group, the Plymouth Brethren, who sold their building to a Sikh community in the 1980s. Unlike the church we had just visited this building had plentiful parking space, and some of the group pointed out that gurdwaras were used for large wedding parties and thus needed parking. The building was easily identified as a gurdwara by the orange flags around the perimeter of the building and the group were intrigued by a large fibre glass statue of a Sikh warrior in the car park. To enter the building we needed to remove our shoes and cover our heads – not everyone had come prepared and so had to borrow the range of colourful head coverings provided in a box in the porch.

Sikh warrior in the car park of the London Sikh Centre 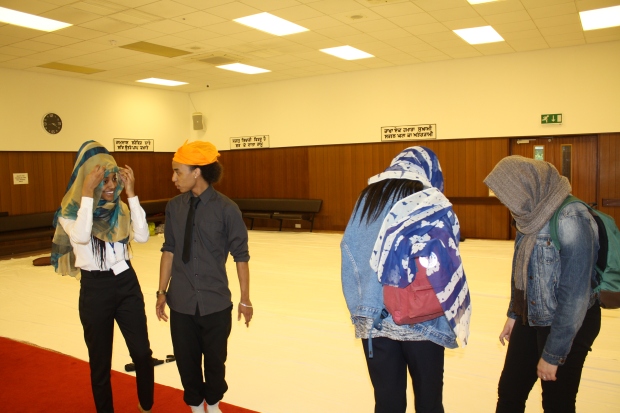 We were welcomed by the Sikh priests who asked if any of our party spoke Punjabi but between us we did not have enough language to speak to him. Nonetheless he showed us the main prayer hall with a covered carpet and the dais at the front where the Sri Guru Granth Sahib is brought to be read. What struck the pupils immediately was that there were no pews or chairs – just open space to sit on the carpet. They commented that this was very open and welcoming, you were not constrained about where to sit (although usually men and women would sit on different sides of the building). Reflecting on the wider challenge of the architecture project to build a multi-faith building, one of the pupils commented that it was important to make people feel comfortable, ‘and calm’ so that they could feel welcome just to come and sit and pray. 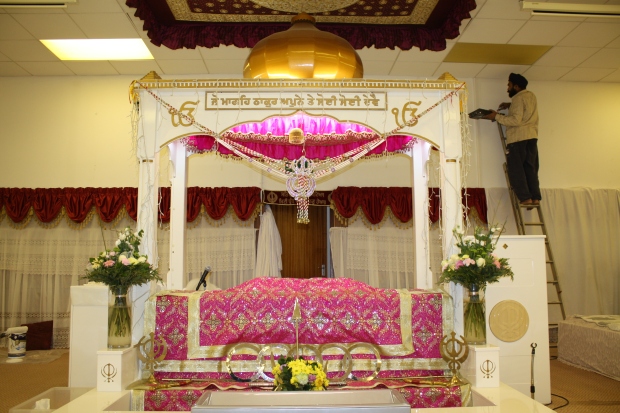 Some of the pupils had visited a gurdwara before, and bowed at the front before being offered ‘prasad’ (blessed sweets). Pupils took pictures in the prayer hall of the musical instruments and the decorated dais. They commented on how the building had a ‘make shift’ feel compared with the purpose built church we had just visited. From the prayer hall we went to the langhar hall where a lady who was visiting the gurdwara with her grand-daughter explained the importance of food always being available at the gurdwara, twenty-four hours a day. She showed us the large kitchen in which food was prepared on shining metal trays. Some of the key themes which emerged for the pupils from this visit was the simplicity of the worship space and the involvement of the community in the upkeep of the temple – a young man was painting the walls when we visited. 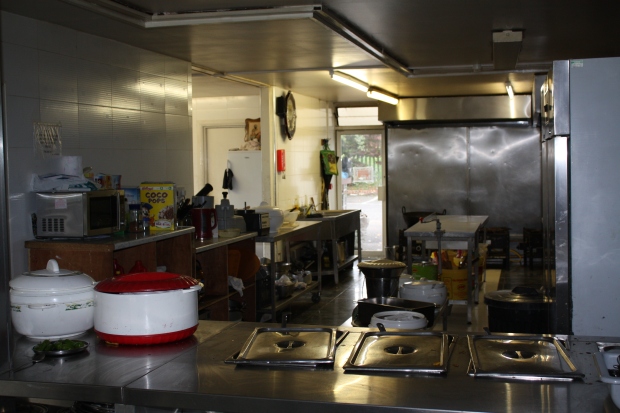 Kitchen in the Langhar Hall at London Sikh Centre

Our next stop was Ealing Liberal Synagogue, located just a few hundred yards down the road from the gurdwara. Again we gathered outside the building, on the corner of Lynton Avenue, for the pupils’ initial reactions to the corrugated iron building in front of them. 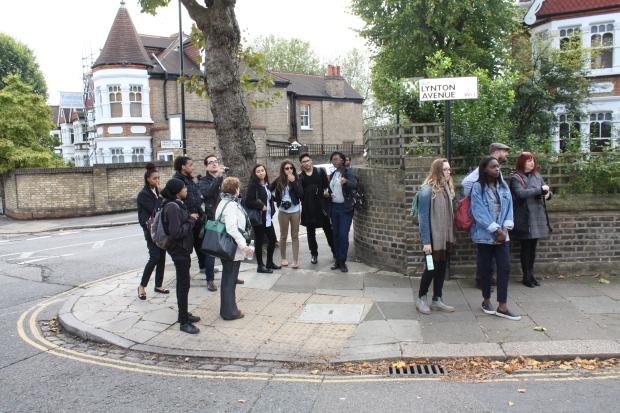 The group view the synagogue from across the road

The group quickly identified the building as looking like a church. They were intrigued by the history of the building – ordered as a ‘tin tabernacle’ from a mail-order catalogue ‘like an Ikea for churches’ and originally built as St Luke’s Church, a satellite church to St Stephen’s Church in 1901. The other thing which struck everyone from the outside was that ‘There’s no sign that it’s a synagogue.’ it was not until we reached the front door that we could see a small star of David on the notice above the door.

Inside we are greeted by Rabbi Janet Burden who encouraged the pupils to wander round and explore before inviting questions as the students sat in rows on the original pews which are still in use in the building. Rabbi Janet opened the ‘ark’ behind the lectern on the central dais to show where the community’s Torah scrolls are held. She explained that she finds the current layout of the synagogue somewhat restrictive as all the pews are fixed in place. She explained that she would prefer a more flexible space, with chairs which could be rearranged into circles, as this would better reflect her own theology rather than the current layout which, as the pupils pointed out, retained the focus on the altar/dais like the church we had just visited. For the pupils this idea of ‘God is everywere’ resonated with some of their own ideas about designing a place of worship.

The pupils asked about the lack of signage outside and several of them had seen a notice about security in the porch. Janet explained that the community had voted to remove the street sign to the synagogue because of security concerns and reflected that she felt sad that people had felt that necessary. However one very interesting feature of the synagogue which clearly marked its change of use were the stained glass windows. Unlike the abstract design of the coloured glass at Our Lady and St Joseph’s these windows depicted symbols of Judaism including a Torah scroll, menorah candles and a Star of David. Although there is no record of who made the windows, they appeared to have a sense of humour, with a pair of spectacles resting on the Torah scroll. Everyone liked the stained glass windows as a nice sign of how the Jewish community had made the church their own religious space.

From the synagogue we walked across Drayton Green playing fields and over the railway bridge to come out on the Uxbridge Road in West Ealing where we walked up to join the other group at the Sri Kanaga Thurkkai Amman (SKTA) Hindu Temple. Looking at the building from the outside it was quickly identified as a chapel, with its distinctive architectural style with tall windows and the pupils found the foundation stone giving the date of the original Baptist Chapel built in 1865. However the outside of the building shows signs of its current use as a Hindu temple with statues over the porch and a small glass building next to the chapel with a brightly coloured ‘chariot’ inside.

We entered the building down the narrow corridor leaving our shoes outside and everyone was immediately struck by the contrast between the interior and exterior of the building. Inside the temple was filled with worshippers, many in brightly coloured traditional clothing, particularly women wearing saris, making offerings via the priests at the various Hindu shrines around the building. The red painted floors was warmed by central heating and the air was filled with the scent of jasmine flowers. One of the pupils attends this temple and he was able to take some of his friends around to show them the temple, but he also felt awkward to be at his own place of worship as a ‘visitor’ rather than for prayers. However, we were made very welcome and members of the temple were happy to answer questions or show people around. 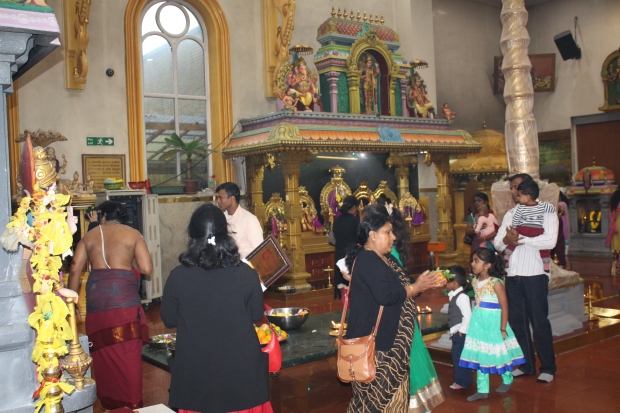 A key theme of the field trip, and of our project more broadly, is looking at how faith communities are creative in making spaces of worship. This final building was perhaps the best example of this as there was such a contrast between the interior and the exterior of the building. Many of them had visited spectacular purpose-built new Hindu temples in London, such as the Swaminaryan Temple in Neasden, but did not know that this temple existed within their own neighbourhood.

The field trips were a great way to start the architecture project by introducing the pupils to our case study sites and our research on Making Suburban Faith. For the third workshop the following week at Brentside, each group presented a short introduction to each of the visited places of worship. The presentations identified some of the key themes highlighted above about the specific use made of different buildings by their congregations, but the pupils were also already thinking about their architectural brief for the project. So the presentations drew out some common themes: How do people use the space? Are their rules about how to use the space? Does it feel comfortable, calm, sacred in this space? Prompted by our architects Stephen and Pepe the pupils also identified key elements in the design of the different spaces – the use of arches, symbols, colours, height, light – in the construction of the building. They were asked to bring images of some of these elements for the next workshop at Brentside.